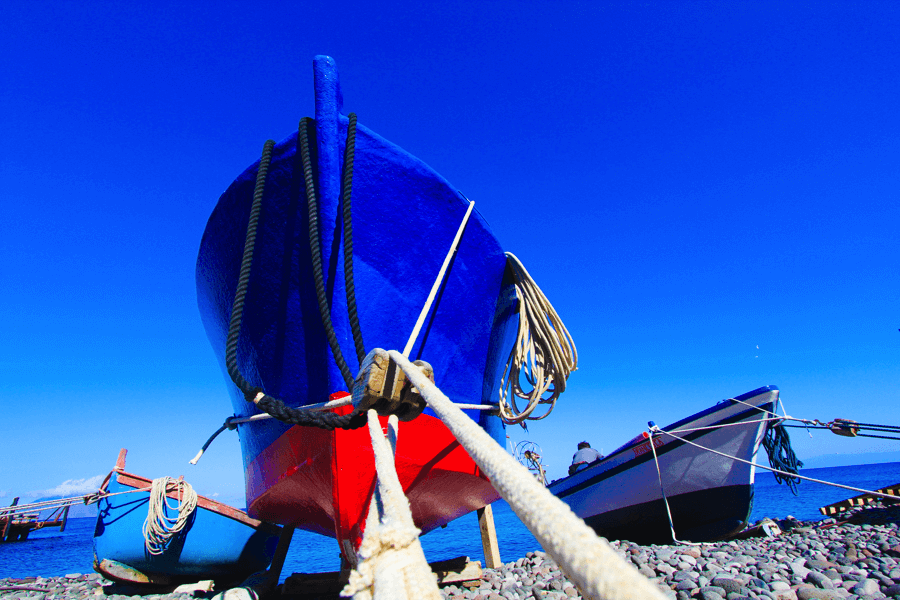 What you can experience and see is just a volcano fraction of few square kilometers (approx. 5), with a very regular and elegant shape, about 500 meters high. The remainder stays silently underwater, together with fishes and other four volcanic cones that have never emerged: Eolo, Enarete, Sisifo and Glauco.

This island welcomes you immediately if you are not looking for clubs, restaurant and smiles of 5 star hotel receptions. If you are looking for authenticity, with its pros and cons, this island will prove it to you immediately. From the small harbor, we reached Anna in a couple of minutes’ walk. She is the owner of a small shop that sells everything and holds the keys of the house where we would spend the night. Anna is very kind. Her husband Ettore and she told us about the island in a few minutes. They also told us that it would be difficult to reach the house with our luggage, since the rise is too steep and there are no streets on the island, just stairways. Anna reserved a mule for us so we could move our suitcases and she offered us some bottles of water.

We met Guglielmo by the harbor and he guided us home. The rise is very steep and, even if the house is one of the closest to the harbor, we arrived out of breath and sweaty. Guglielmo was flawless, even if he is about 60 years old. He had been going up and down stairways for hours each day…since he was born. The view from our terrace was wonderful, you could see Filicudi, Salina, Lipari and Vulcano, but it was too misty to see Stromboli and Filicudi and Salina hide Panarea. On the south, on the other hand, Mont Etna stood out, majestic and still covered in snow. From there we could see the northwestern side of Etna, right where our vineyard of SantaMariaLaNave is located, along with our vines of Grecanico Dorato and Albanello.

Guglielmo stayed with us for a while and, thanks to his words, we was able to understand better the island, or at least his version of it. He is a gentle man, supporting his family harvesting wild capers on the “Montagna”. He said that in that area they belong to no one and that, waking up at four in the morning, he could be home by midday carrying on his shoulder a 60 kg sack of high quality capers. Going on the mountain means a very tiresome trek of one hour and a half. That means that Guglielmo is able to harvest approximately 10 kg of capers in an hour: an unbelievable skill.

Guglielmo told us about his life (that is also the life of the island). Once people only grew the land: barley, capes, vines that had survived phylloxera (Guglielmo’s family produced about 1000 wine bottles per year). The richest families had small palmenti, which they used for the vinification process. The vines were a mix of white grapes (probably Malvasia), red (maybe Corinto Nero, Nero d’Avola and our Nerelli of Etna: Nerello Cappuccio and Nerello Mascalese) and another vine variety producing straggly bunches with very small berries that, from the description of the cluster and of the leaves, we thought to be a kind of American vine. After the regional livestock contributions, sheep, cows, goats and rabbits appeared on the island: it was the ruin of agriculture. Cows ate most of the vines and then died, it was impossible to feed them with the scarce resources of the island (in spite of the barbaric practice of setting fire to the rural areas in order to foster the growth of wild weeds, destroying even more the various vineyards). Goats took advantage of their strength and their adaptability instead and became wild (it is difficult to understand why people say, in order to insult someone, “sei una capra!” (you are a goat!), since these animals are very smart!). Today, on the island, there are still 300 goats, completely gone wild. They fear men and they cannot be milked. Sometimes a hunter kills a couple of them with his rifle, in order to eat their meat. Bringing livestock on the island has destroyed its agricultural economy, its true social heart probably since prehistoric times. Even on the hydrofoil you can see some extreme terracing, small fertile strips that have been tore off from the volcano steepness. Almost all terracing, today, are completely abandoned: the production for each terracing is too low and the cultivation expenses too high. Agriculture worked only on the Pianoro (Alicudi’s volcanic cone), in an area called Montagna. In prehistoric times, it was there that men chose to settle. A strong humidity falls in the evening, allowing man to cultivate the land without irrigating. Animals, however, destroyed everything. Alicudi’s agricultural decline and the economic boom of other places brought locals to emigrate (the population lowered from 1000 – maybe 1200 inhabitants to less than 100, 40 during winter). Other locals started to commit themselves to fishing.

The next morning we were curious to see Pianoro (the inner volcanic cone, the most fertile area). A 62 years old man from Brescia explained to us how to get there, saying that he always went there and that it took him about an hour. This man from Brescia is another gentle person and seemed a very good man. He told us that he has been living on the island for fifteen years. He was a truck driver and got tired of “sitting for hours in a traffic jam”. One day he asked his boss a 4 months’ time off work and, when his boss refused, the man from Brescia resigned and came to Alicudi: “I was lucky for that refusal!”. “What are you doing here?”, “If when I wake up the weather is good I don’t do anything. I enjoy the island, I harvest capers and vegetables, I grow my vegetable garden.” He lives in a house that his friend Ettore has lent him, since it was empty. As we talked, Ettore made him a sandwich.

Before we left, we ran into Guglielmo, carrying a sack of wonderful and scented capers. His story was not a lie: there were dozens of kilograms of capers in that sack. We began to climb, but the street was very steep. A mule track almost dug between the ancient volcanic lava flows. In front of us there was Filicudi and its sisters, behind us Mount Etna. The more you climb, the more beautiful the landscape becomes. Everywhere there are caper plants and heathers, the plant that gives its name to the island, along with some geckos and harmless grass snakes. Climbing it’s not easy, the steps are uneven and made for mules. Many houses are abandoned; it is normal, if the population has decreased so. Almost in every house, even in the abandoned ones, pergolas resist. Some of them are huge, maybe they are hundred years old, with trunks big as trees. We passed the first church (Chiesa del Carmine) and we kept climbing. We heard the sea, a few birds, seagulls, some mules braying in the distance and some roosters. Nothing more. Someone had planted flowers near his home. Maybe he left it afterwards, but the flowers keep growing, especially brooms, filling the air with their scent. We kept climbing and, after an hour and a half, we reached San Bartolo’s church. We heard some voices from a house below and asked how long it would take to reach Pianoro. A German woman that was sun bathing with no clothes on covered herself with a towel and answered, in English, that walking fast it would take still another hour and a half. The man from Brescia was optimistic! We were hungry and decided to go back down. First, however, we decided to prune the pergola in front of San Bartolo’s church, which seemed abandoned. We wanted to do a little favor to the priest of the church and to the plant itself. We went down. On our way, we met two mules climbing the mountain, carrying a heavy load. One of them farted loudly; maybe it was the climbing effort. We wished to it 100 years of health and kept going down. When we reached the harbor, Anna’s daughter made us some sandwiches of at least half a kilogram each. She told us that local people are trained and climb in half of the time. For a person not used to it, climbing from the harbor to Pianoro takes 3 hours. Time, too, has a different meaning here in Alicudi. She told us that San Bartolo’s church does not have a priest and neither does the island. Since the old priest’s death, they had not sent “a new” one. When they need him, the Lipari priest comes.

We went back home to enjoy a good rest on our wonderful terrace. Guglielmo had already put the capers to dry, they were wonderful to see and delicious to smell.

On this terrace, we felt more at home. Maybe it was the presence of Mount Etna, far away but visible, that helped us overcoming any fear. We opened a bottle of Millesulmare 2012 and drank to her: our beautiful mountain and her 18 years! 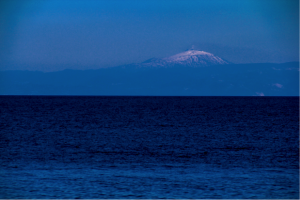 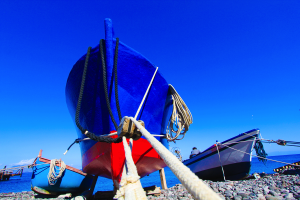 The port in the morning 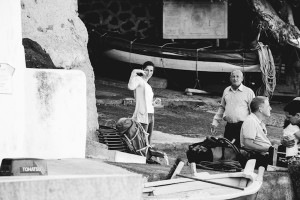 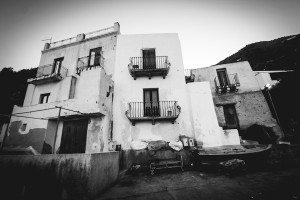 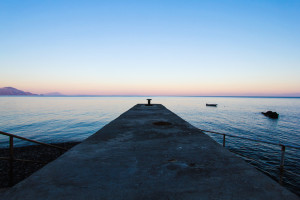 the only place where there is phone signal 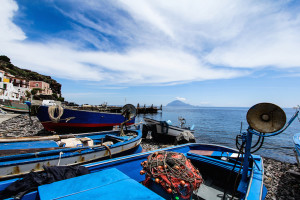 The mini port and Filicudi in the background 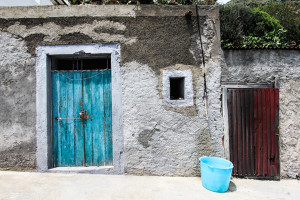 The storage of the fisherman 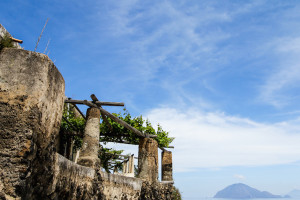 Old houses and Filicudi far away 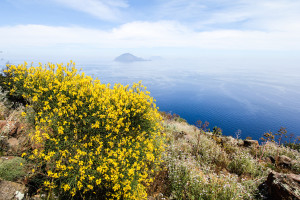 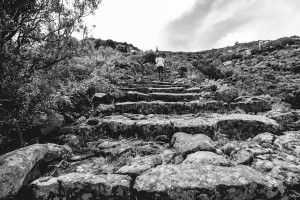 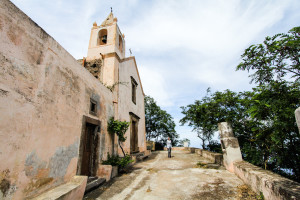 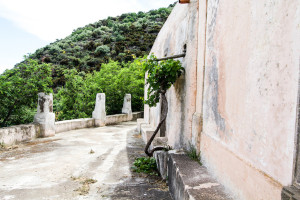 The Church’s vine after pruning… 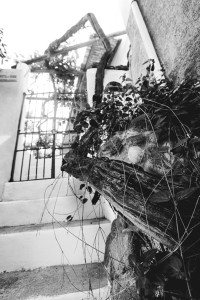 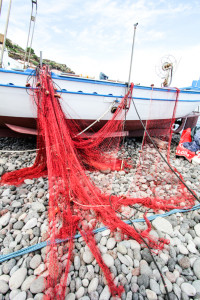 The fisherman is back and is checking his tools 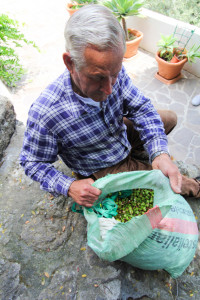 Guglielmo and his cappers 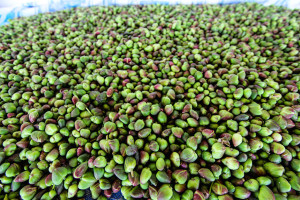 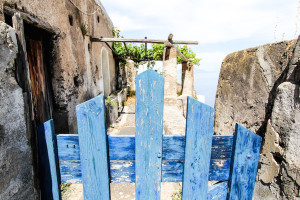 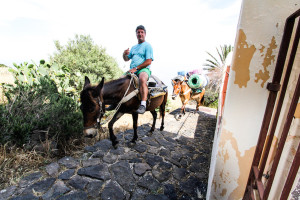 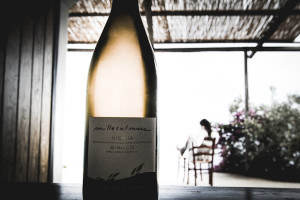 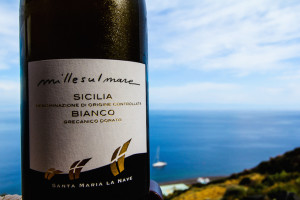 Sunset from the terrace…