“A Wine Tasting at 1000 Meters of Altitude with the Wines of the Etnean Winery SantaMariaLaNave.” 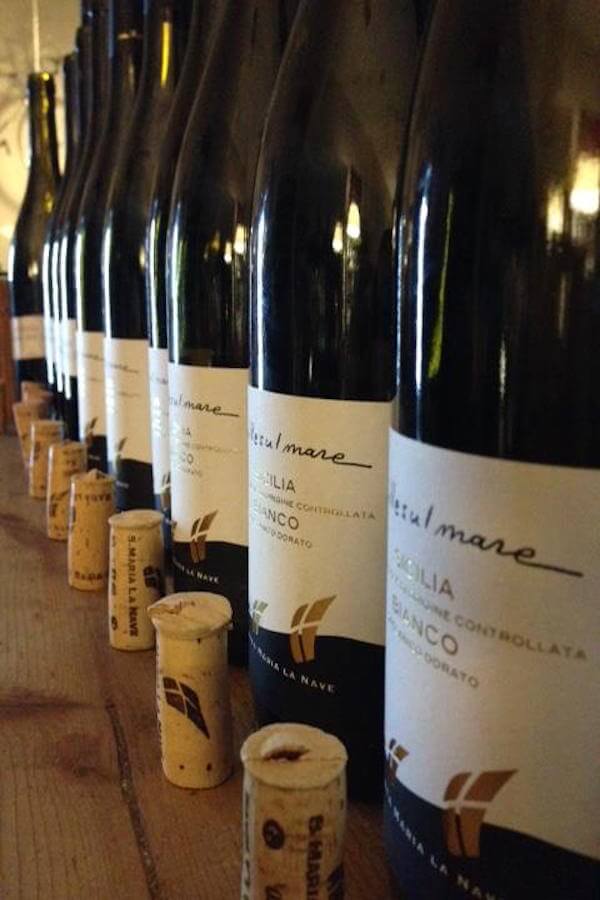 On Saturday, January 16, we were guest of Tuscanative in Arezzo and spent a wonderful evening at a tasting of our wines, Millesulmare 2013 and 2014 and the Calmarossa 2014. We were completely charmed by the dishes that Chef Luigi Casotti came up with and prepared with love to specially match our wines, after he had tasted them with great care. An extraordinary food and wine matching to say the least!

Below is the article that the reporter and sommelier Fabio Panci published about this great evening on the famous Luciano Pignataro’s wine-blog.

“A Tasting at 1000 Meters of Altitude with the Wines of the Etnean Winery Santa Maria La Nave and the Creations of Luigi Casotti of 3 Bicchieri, Arezzo”.

“I want to start writing this article thanking all the protagonists of the wonderful evening, January 16, 2016, titled: “Santa Maria La Nave. A Wine Tasting at 1000 Meters of Altitude on Mount Etna’s Slopes”, starting with the company owners, Sonia and Riccardo, the extraordinary Chef Luigi Caostti, Enrico and his shop, the Tuscanative, for their hospitality and, last but not least, all the friends that attended the event.

I know, the expressions of gratitude should be usually placed at the end, but in this case I thought it was appropriate to underline the contribution that all of them gave to the perfect success of a truly memorable event, an event where wine, food and company travelled on the same wavelength, creating a convivial atmosphere that would be difficult to recreate elsewhere.

Moving to the organizational part, I’ll start saying that the “courtship” to bring to my city, Arezzo, the wines of this Etnean company started long ago. During the last edition of Vinitaly I discovered the microscopic reality of Sonia and Riccardo almost by chance and I was completely struck by it. From that moment onwards, my only objective was to bring into my city a small “piece of volcano”.
The next step was involving my friend Luigi Casotti, Chef of the restaurant I 3 Bicchieri, in Arezzo, in order to prepare three dishes (or I should say three authentic creations) to be served with the two vintages of Millesulmare, 2014 and 2013, and with the Calmarossa of 2014.
Cuddled by the unique atmosphere of the wine and food shop Tuscanavite, the evening started with an introduction to the history of the company. Riccardo told us how the first patch of soil on Mount Etna was identified, about his first microvinifications, thirty years ago, along with his father and his brother, about the friendship and the following consultation with the Benanti family (pioneers of the Etnean viticultural world). Then they proceeded with their “insane decision” (these were exactly the words he used) to produce a wine, or better two, on their own, with indigenous vine varieties and indigenous coworkers, just for the sake of it and without a merely lucrative purpose.

And then we got the ball rolling with the 2013 vintage of Millesulmare. A grecanico dorato, a rare vine variety that gets vinified in purity but is increasingly blended with the more famous carricante and is grown at 1000 meters of altitude on the north-western slope of the volcano. It was served along with the first work of art signed by the Chef Casotti, who delighted us with a grouper ceviche with citruses, confit fennel, blueberries and candied grapefruit. A wonderful matching, where the typically South American marinate of the grouper united perfectly with the citrus and floral notes of orange blossoms and with the important mineral traces left by the wine. The pleasant acidity on the palate with its savoury final notes cleaned the mouth, exalting the grapefruit zest as the last taste-olfactory memory. 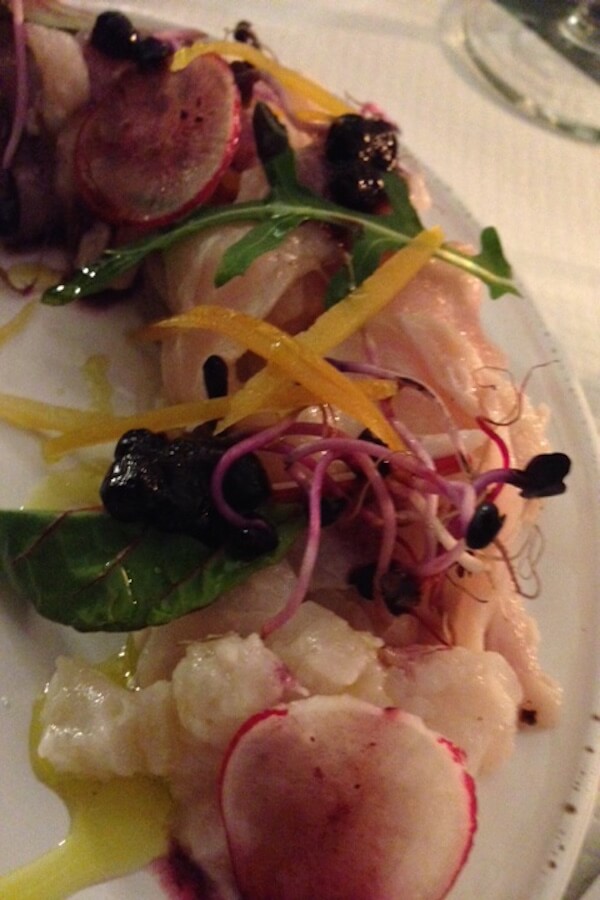 The following was the 2014 vintage of Millesulmare. It was the same vine variety, but with different characteristics, especially in the flavor part. Regarding its aroma, its floral scents were similar to the 2013 vintage, but it had a stronger tropical fruit push and, to say the truth, the typical “volcanic note” was less accentuated. An important acidity explodes on the palate, alive and rich of citrus notes, which alternates with its sapidity and its fruity nuances. The wave of freshness of this wine is a perfect contrast to the corresponding dish (and in particular to its innate aromatic quality), which was composed of a light creamy stockfish, puntarelle sautéed with butter, corn chips, a sour yoghurt emulsion and desalinated anchovies. 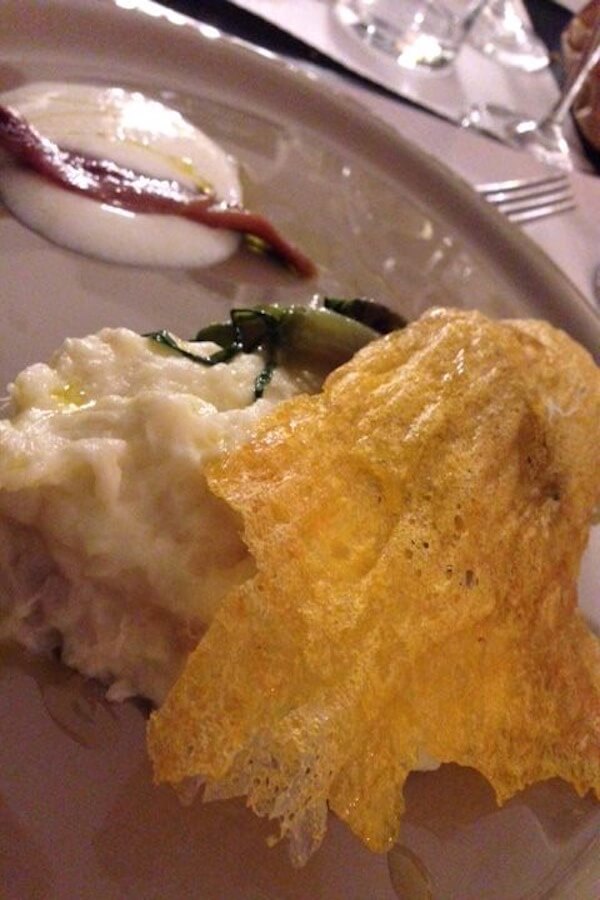 The perfect ending for the evening was about the “impudent little boy”, a perfect definition for the Calmarossa of 2014, a nerello mascalese with a small part of nerello cappuccio. Grown on the south-eastern slope of Mount Etna at 500 meters of altitude, these two prince vine varieties of the “red” Etnean viticulture have revealed all their brazen youth. An already “very clean” aroma with underbrush fruits leaves space to interesting spicy notes and balsamic fragrances, with a final slight toasting. What emerges in its flavor is its sour note, the tannin, noble but still in its evolutional phase, and the alcoholic part, noticeable but well balanced by its typical savoury final notes.

The matching wasn’t surely the easiest one, but the mastery of Chef Casotti was once again obvious when he presented his dish, composed of Chianina mince, shallot with sugar, lard mousse seasoned with basil, rye bread crumbs with evo oil and a delicious pesto with Sorrento nuts and arugula. 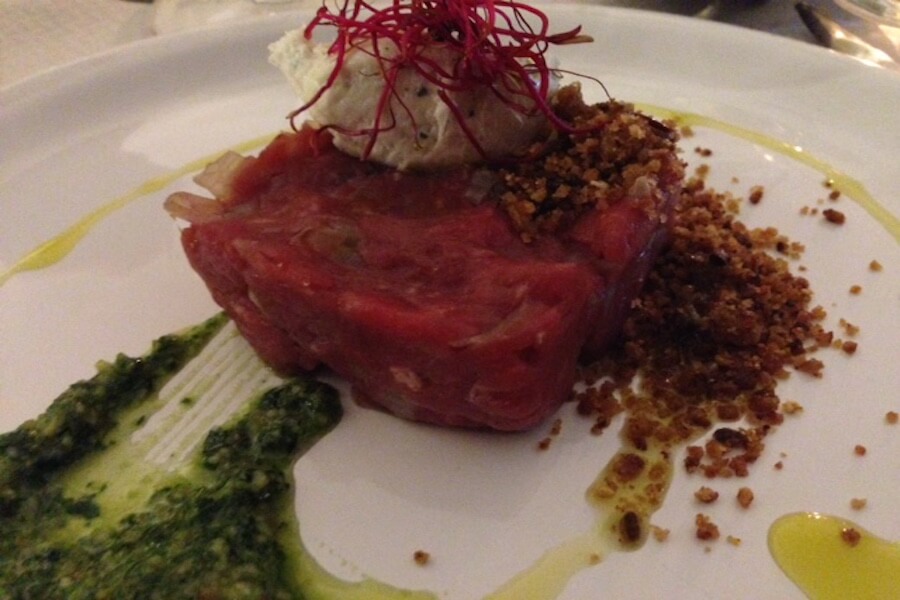 In the end there is not much more to add or, to be more accurate, one can only say, “I was lucky to be there that night.”

Here is the link to the article: http://www.lucianopignataro.it/a/vini-santa-maria-la-nave-ristorante-3-bicchieri-arezzo/100617/

I wanted to thank the Tuscanative boys for their kindness and professionalism, Chef Luigi Casotti for all the emotions he gave us, Fabio Panci for the wonderful article he wrote, and also all the beautiful people who were there.