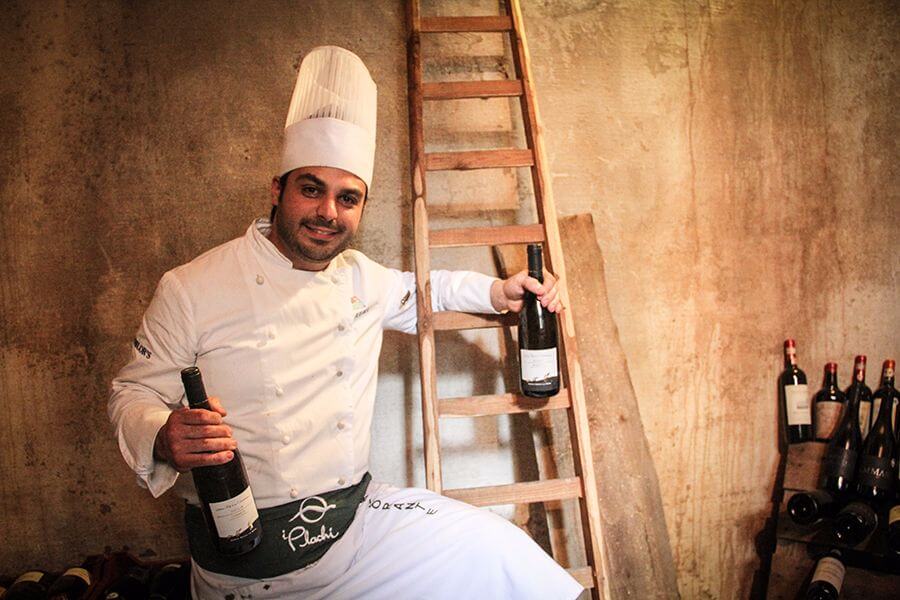 The chef Angelo Scuderi has chosen our wines as top products for its restaurant, pairing them with typical dishes of Etnean tradition, revisited with its innovative style, and also as ingredients for some of his recipes, which we will be publishing on our blog during the next months. We thank chef Scuderi and we report the introduction page to his menu, which is a great honor for us.

“Sicilian cooking, like the personality of its inhabitants, has been shaped during the centuries by many cultural influences and by the wonderful nature that blesses this land. The populations that centuries ago passed here always brought something more. Arabian, Phoenician, Spanish and Norman people took part in creating a wonderful gastronomic culture that was able to assimilate the best of the ethnic influences of its “rulers”, making them its own and completing them with spices, aromas and scents of fruits and flowers of the island.

The miracle of Mount Etna adds a particular touch of magic to the gastronomic tradition of all the oriental Sicily, enriching it with mountain flavors and with the endless fertility of this ancient volcano, born from the sea.

The culinary project I am presenting you aims at honoring our wonderful volcano and its most typical and purest ingredients, without forgetting some selected influences from other areas of our island. It is the result of years of researches, passion and sleepless nights. I have selected every ingredient with the highest possible degree of accuracy and I have personally monitored its origin and the love with which it had been produced, harvested or bred. I have chosen only producers with the highest respect of ethical principles. In my recipes, you will find ingredients coming from the depths of our sea or from the highest altitudes of Mount Etna, in order to represent our wonderful nature in its completeness.

The wine I have chosen as a symbol of the purity of my cooking is Millesulmare of the company SantaMariaLaNave, a completely local product from an enchanting heroic vineyard of Grecanico Dorato at 1100 meters of altitude on Etna, one of the highest vineyards in Europe. I have visited the vineyard during different periods of the year, I harvested there, I tasted the grapes before the fermentation and the ageing must. I have chosen it as a pairing for my dishes but also as a cooking ingredient, because I love its volcanicity and I share its values.

I hope you will appreciate my cooking, rebel and orderly at the same time, minimalist and chaotic: just like Sicilian people! Buon Appetito!