Nerello Mascalese is the undisputed prince of the vine varieties growing on the mystic Mungibeddu, the Etna volcano. This volcano is located on the eastern coast of Sicily, eternal land of fire and passions, and inherits its extraordinary nuances, enclosing them in a wine of intense flavor and opulent shades that make it truly unique. This uniqueness is partly due to the soil, rich in ashes, mineral salts and sand, of the highest active volcano in Europe that, with its altitude of 3300 meters and its huge conical shape, overlooks uncontested the magnificent Catania and the romantic Taormina.

Its uniqueness is also partly due to the climatic conditions, characterized by strong temperature fluctuations between daytime and nighttime, and to human work: planting density (6000/9000 vines per hectare, with a plant spacing of 1×1 o 1,25×1,25); growing techniques and farming methods preserving the old and traditional bush-training system, with supports of chestnut wood; 2-3 branches per plant, a spur with 2 gems; and an average production of about 60-70 quintals per hectare. 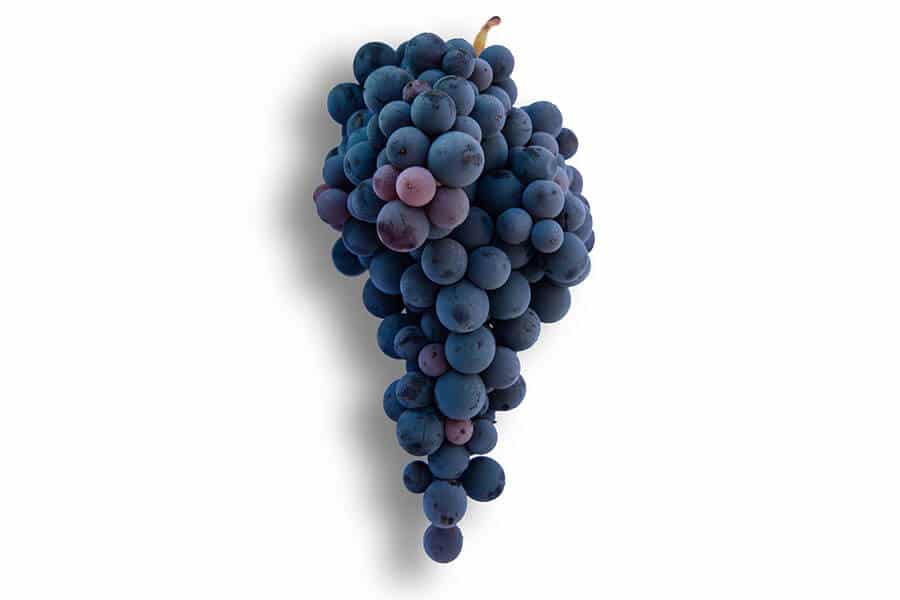 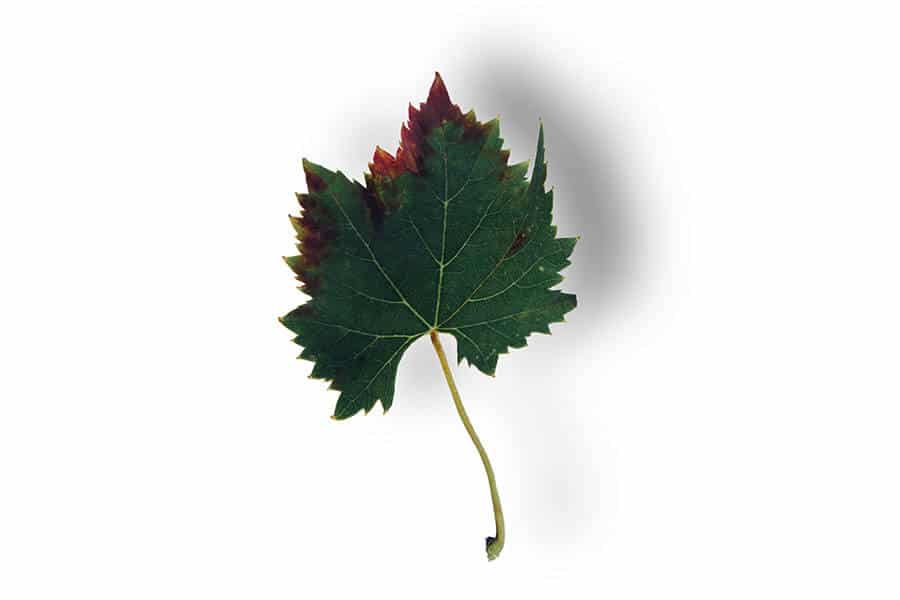 The long history of Nerello Mascalese

This growing system requires heavy manual working, since it is not mechanizable and involves very high expenses. Therefore, it was almost completely abandoned during the years, since people preferred more “evolved” systems. This did not happen in the Etna area, which gave birth to Nerello Mascalese. In many other Sicilian areas, man employs a vertical trellis system, mostly in the zones around Palermo and Agrigento, where in the last thirty years Nerello Mascalese became so widespread, that it can be considered the most cultivated vine variety with black berries after Nero d’Avola.

Thanks to its high vigour, Nerello Mascalese can produce under intensive cultivation methods up to 350-450 quintals of grapes per hectare, but this is not the case of a winemaker looking for quality, this is not the case of Mount Etna. The perfect formula to produce a great wine from a vine variety such as Nerello Mascalese is, therefore, a delicate balance between nature, man, who is an integral part of nature and the observer of its qualitative phenomena, and the evolution of the vinification techniques, finally free from the obsession about quantity.

Niuriddu Mascalisi, as Nerello Mascalese is affectionately called by Etnean winegrowers, does not have a clear and definite history. Its origin is lost in the midst of time. Some recent studies have however proved that this local red vine variety made its first appearance during the Greek colonization in the VII century B.C. on the coasts of Calabria, moving then to Naxos and later to Catania in 728 B.C., when Greeks introduced, on the eastern part of Sicily, the cutting cultivation technique and the cult of Dionysus, the god of wine. At that time, many Greeks were growing vines in the eastern part of Sicily and on the slopes of Mount Etna. They say that also the poetess Saffo, banished from her homeland, the Island of Lesbos, moved to this area of Sicily and started cultivating vines.

It was only during the Roman age that Nerello Mascalese started spreading on the slopes of Mount Etna, becoming an interesting alternative to the famous Falerno. Here it put down roots in the area of the Mascali plain, a small agricultural zone between the sea and Mount Etna in the province of Catania, hence its name “Mascalese”, and in the territories of Randazzo and Castiglione di Sicilia. Mount Etna would host Nerello Mascalese for centuries, with its extreme volcanic land at an altitude between 350 and 1100 meters above sea level, which offers the best climatic conditions for its cultivation.

Despite the fall of the Roman Empire and the successive Arabic domination of Sicily (which didn’t erase the local wine culture, contrary to common belief, but simply reduced it), and which was followed by the Norman and Bourbon ones, Nerello Mascalese has never been completed abandoned, rather it has been handed down to us in all its pride and nobility.

In 1968, Nerello Mascalese became the main ingredient of the DOC denomination of Etna Rosso (Etnean red wine) of which it represents a good 80%, whereas the remaining 20% is composed of the Nerello Cappuccio vine variety. It is used, to a lesser extent, also in the DOC of Alcamo, Contea di Sclafani, Faro, Marsala and Sambuca di Sicilia, besides those of Calabresi di Lamezia and Sant’Anna di Isola di Capo Rizzuto. Nerello Mascalese is thus recognized on the international wine scene as a local and sometimes extreme Etnean vineyard. Other characterizing elements are its late ripening, generally during the second and the third week of October; the fact that its grapes are vinified in red, after a long skin maceration; and finally that it allows producing some important red wines, suited to ageing.

In the Etnean area between Mascali and Randazzo, it is common to find ancient bush-trained vines of Nerello Mascalese, clinging to the mountain and its black terrace of lava stone with strength and vigor. Man can notice the absence of a geometrical planting pattern: in the past, the cultivation practice of offshoot growing, the so-called “purpania”, was diffused on Mount Etna. Man used to bury the vine-shoots in order to restore the closest gaps. Nowadays this technique allows us to admire, in these heroic vineyards, a prominence of ungrafted vines. In our vineyard of SantaMariaLaNave, thanks to the healthy environment and to an altitude of 1100 meters above sea level, we restore the few gaps using an offshoot-method. 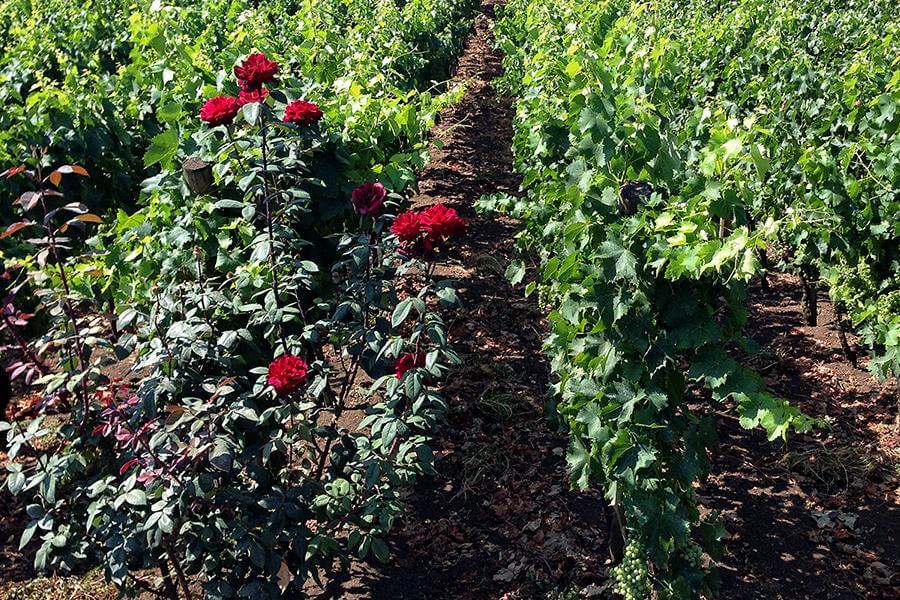 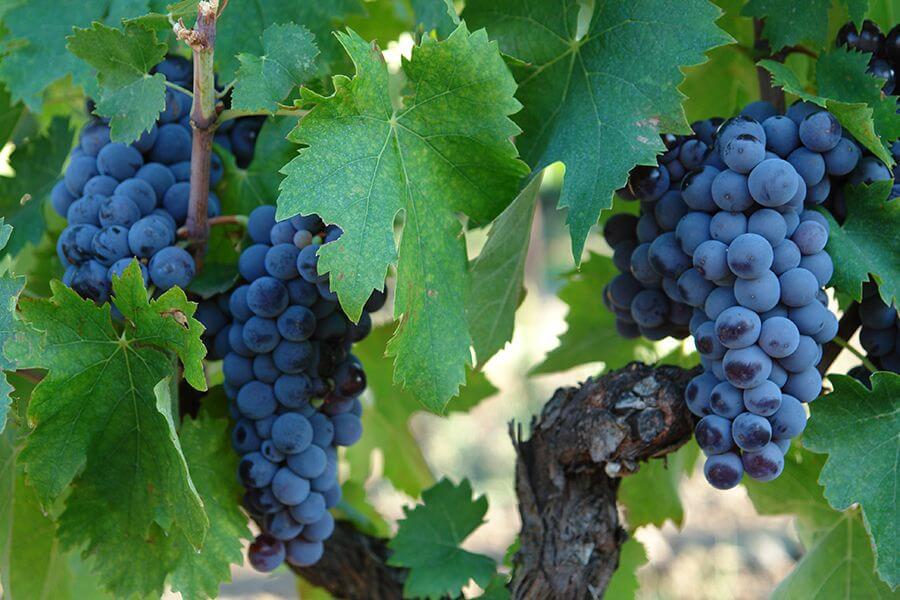 Nowadays, the Etnean Nerello Mascalese is characterized by a group of clonal selections that are very different one from another, extremely vigorous from a productive and vegetative point of view, and presenting typical large leaves, mostly pentagonal, trilobed, with a hairless surface, opaque and of a light green color. Bunches are quite big and elongated, with a conical/pyramidal shape (which resembles an upside-down Mount Etna!), compact and winged. Berries are medium-sized and sub-ellipsoid, but regular, with a thick and solid pruinose skin, of a light blue color.

The productivity of these plants is plentiful but not always regular, whereas the vigour is generally excellent, even if it depends both on the year and on the Etnean area on which Nerello Mascalese is cultivated. Even if the growing conditions and the cultivation practices are the same, the differences that the Etnean microclimate presents between July and August and between September and October influence greatly the qualitative performance of the vines, even within the same year, depending on the slope of Mount Etna and on the altitude on which they grow.

This vine variety, due to the sandy nature of the volcanic soil, faces a severe water stress due to high rainfall, especially before summer or before harvesting. However, it also faces a serious drought stress, due to summer heat, that can affect the size and the weight of the berries. This can jeopardize the optimal ripening of grapes (given that Nerello Mascalese is a tardive local vine variety), with negative repercussions on the produced wine.

Nerello Mascalese goes through these cultivation phases: pruning during January; tying of the leaves to poles or wires during the budding phase; removal of the bottom leaves of the buds; fruit setting during June, in order to free the bunch and facilitate the aeration and exposure to sunlight of the best grapes.

The organoleptic characteristics of the monovarietal Nerello Mascalese generally are a ruby red color, with subtle grenade tones; a strong fruity scent of red berry fruits, with slight floral shades, a spicy hint, and a feeble effusion of vanilla and tobacco, with a persistent trace of licorice; and a dry, tannic, persistent and harmonic taste, with a strong body. At sight, the wine seems surely more mature than it appears when smelled or tasted. Treating this vine variety in a traditional way, it can produce a wine presenting the above-described characteristics.

Through a vinification without marcs, Nerello Mascalese produces the famous “Pesta in Botte”, typical of the Etnean area. The alcoholic percentage is between 13-14%, the ideal service temperature is of 18-20 C°. It should be served in glasses for red wines of full body. It goes perfectly with red meat, game and mature cheese.

Nerello Mascalese has been one of the most important examples of local cultivation in Sicily from time immemorial. However, this vine variety faces a strong variability that could jeopardize its quality. It would be desirable to design a comprehensive valorization and clonal selection program, which some of the most conscientious winemakers are already doing on their own. Thus, we could understand the differences between the several heterogeneous clones of this vine variety, producing stronger varieties, immune from difficult to treat diseases like fanleaf viruses, infectious yellows viruses and mottle viruses. The result would be a healthier and stronger wine, with a complex bouquet and capable of better ageing.

The success of this vine variety and of its wine, along with its ancient history, proves that aiming at a quality as pure and honest as the hands of the vinedresser who grows it can always be a successful strategy, because it offers authentic and pleasantly original flavors. Thanks to Nerello Mascalese we can truly get close to perfection.