To understand the wines of Mount Etna, one must first know the volcano, its history and its people. It’s an extraordinary territory, a volcano that emerged from the Ionian Sea about 600 thousands years ago and that today occupies an area of 1265 square kilometres, with a 40 kilometres diameter and an altitude of 3330 meters above the sea level.

During the course of the centuries many eruptions, explosions or collapses at various altitudes and on many slopes have created an incredibly heterogeneous territory in terms of soil composition: different lava, different minerals, different ages. The eruptive activity was not limited to the top craters – during the centuries many eruptive centres have opened at various altitudes. Today we can count more than 200 of them. These craters have enhanced the diversity and the heterogeneity of the territory. Take for example Mount Rosso and Mount Ilice, two extinguished side craters a few kilometres away from each other: Mount Rosso presents a ferrous soil, almost of a brick-red colour, while Mount Ilice’s territory varies depending on the slope and on the side. In our vineyard, the soil is made of pure black volcanic sand. They are very close, but completely different.

Furthermore, one must consider the diversity of the slopes (it’s different to grow wines on the South-eastern slope than on the North-eastern slope) and the altitudes, which vary from a few hundreds of meters to 1100 meters. This great heterogeneity is also enriched by the sea, from where the Etna rises and that influences and enriches our viticulture. To this already unique mix we must also add the extraordinary genetic heritage of the Etnean local vine varieties – they are many, more than 40, with relevant clonal varieties. The Etnean territory is wonderful and unique and its diversity can only fascinate every wine lover, since it’s the maximum expression of its terroir. 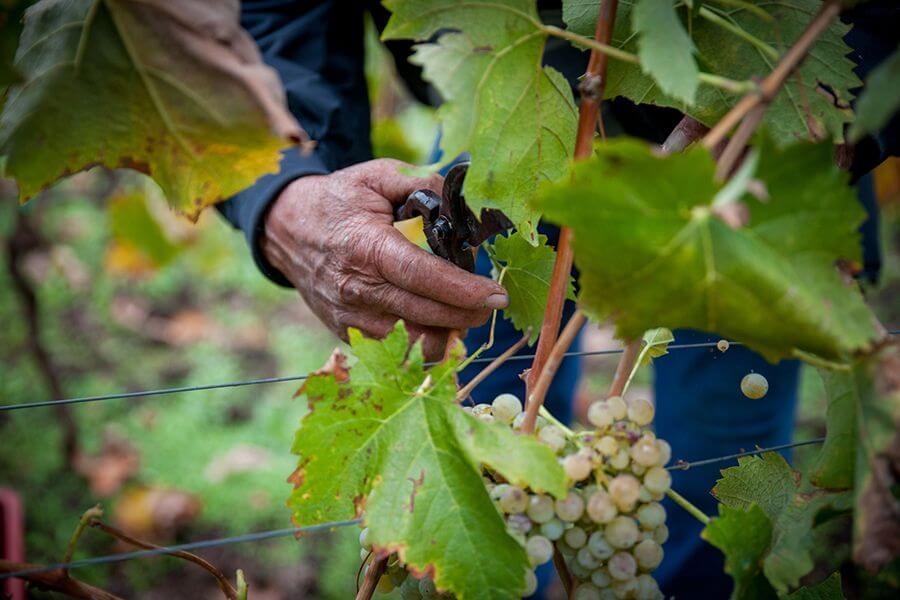 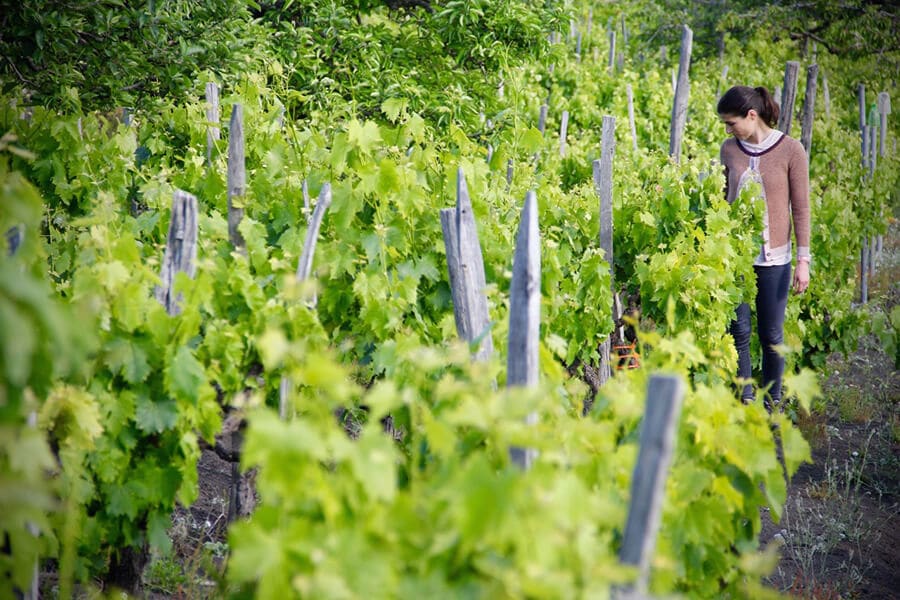 The effect of the volcano on the wine

The volcanic activity on Mount Etna has had a huge influence on its wines through history. All the land where the Etnean vines grow is of volcanic origin – this is true also for the territories with a deep lava structure and a more external organic layer, created through the centuries from a soil that was composed only by eruptive materials. The effect of the most recent volcanic activities varies, depending on the years, on the phenomenon itself and, of course, on the location of the vineyards in terms of slopes and altitudes. Some years on Mount Etna 15-20 eruptive phenomenon occur, with huge outpourings of cinders on the vineyards. Sometimes there are also falling stones, which vary in size and weight.

When I witness huge falls of volcanic ashes and sand from Mount Etna, I am very sorry for the problems it causes to the people. The airport stops working, the water system often gets damaged and the streets become less safe. A winemaker, however, thanks Mother Etna for Her gift, for what I love to call a “free organic fertilizer”. If you stop and think about the fact that volcanic ashes and sands come to us from the depths of our planet, you will feel there’s something more important to it than the fertile minerals falling on our vineyards, something more ancient: an ancestral force, something that’s so pure and atavistic that goes beyond our scientific or practical notion of agriculture.

The role of Etnean people in the volcanic viticulture

The Etnean people have always had a critical role in the viticulture of the area. First of all, in a young volcanic territory it’s a true conquest to obtain a soil that can be used to grow vines, or to grow anything on a general level. This work takes years, sometimes centuries. Our Etnean ancestors “spietravano”, i.e. they removed stones from the fields, and with them built dry-stone walls to create terraces, the fertile spots where the agricultural production took place. Dry-stone walls were and are still true landmarks and masterpieces. We are used to seeing them, since they are part of the territory where we have grown up, but sometimes we must stop and think about all the work that’s behind them. They represent a true conquest, for our territory. After Mount Etna covered the area with lava, the brooms and the other wild plants, aided by the wind, the rain and the thermal excursion, destroyed the lava layer a little by little with their roots, transforming it in organic materials. Then the people cleaned the soil and divided it in terraces. Every time a dry-stone wall on Mount Etna falls, we lose a piece of history.

Through the centuries the people have also selected the best vines for every area, every altitude and every soil. Old winemakers and grafters on Mount Etna are still spontaneously happy when they see a plant in some vineyard or orchard that gives fruits of great quality. Their tradition of gifting each other the most successful grafts, in order to spread the best plants, did the rest. Old traditional Etnean vineyards are communities of various local clones that old winemakers brought from more or less adjoining plots when they thought that the results were of high quality. An extraordinary heritage of biodiversity that should be jealously safeguarded.

And we should not forget another critical credit of the Etnean people: they passed on through the centuries their bush-training system. Every plant has its pole, strictly made of Etnean chestnut wood. This method is incredibly suited to a winemaking production of the highest quality, since when it’s well managed it allows to keep the productivity of each plant very low and to significantly extend the longevity of the vines. Besides, it lends to the vineyards an extraordinary aesthetical elegance, thanks to the many symmetries one can discover, depending from the viewpoint. The most interesting and, at the same time, most romantic thing about the bush-training system is that it preserves the individual characteristics of every vine. It makes it easier to know each plants and to understand its vegetative and productive dynamics. I think of my wines as of my loyal partners. I know that each one of them produces enough grapes to make just a bottle of wine.

Thanks to the bush-training system, I can deal with their individuality, their different “personalities”: some of them bear fruits before the others, others bear more fruits, others are lazier, other bear grapes with a higher sugar content… And all of them contribute to the final result, that can be finally tasted. It’s truly a wonderful thing! Of course one must consider that the bush-training system is very expensive and does not allow any kind of automation, but if you want to make a great wine here, you can’t replace the manual work with one or more machines. The role of Etnean women and men has always been and will always be critical.