The laborious restoration of the vineyard of Mount Ilice

Restructuring, recovering the beauty of the past, is something noble if well done, respecting the nature of the object, recovering its soul clouded by time. People renovate houses, old cars, collector’s items. The renovation of vineyards moves on a different level, recovering a small ecosystem, it follows unwritten rules or perhaps written deep inside each of us, it requires the interpretation of ancient energies and imposes a different dynamic thought. In fact, it is necessary to try to remember a different past, never lived, to understand why centuries before us some farmers, who had technologies and knowledge different from ours, made certain planting and cultivation choices, to try to read the history of plants, to understand what they lived, while immobile they watched in silence the changing seasons, while the old ones of yesterday were born, while we, little men, in the midst of a thousand contrasts made wars, landed on the moon, cured diseases, opened new factories obscuring the sky.

The restructuring of a vineyard deals with living matter, and universal relations between living beings with different needs, sometimes in contrast with the production of the bunch itself, sometimes in intimate symbiosis. There is no rule or set of laws, one must think of doing the best for something that one day will live beyond those who are recovering it. The first time I climbed the vineyard of Mount Ilice, I had the sensation of being in a sanctuary, I was passing among ancient vines taller than me, vigorous, despite the lack of real care. The day was dark and cloudy, but from the vineyard, you could see the sea. I was struck by the silence that allowed me to listen to the music of nature that enveloped me and that we usually cannot hear, thousands of plants and animals living, breathing together. Splendid music disturbed only by the sound of my footsteps on the volcanic sand.

When, after several months, Don Alfio decided to pass the torch and responsibility for the vineyard on to me, and together we managed to convince all the other owners, I immediately decided to put things in order by removing what had been left there or built without the logic of serving the vines. A cleaning that lasted several months, many days of sweat and several truck trips to take away bricks, nets, irons, bins, old doors, useless things put there who knows why for decades, intrusive human signs to be erased to allow the earth to start breathing again. Once the cleaning was complete, I still didn’t know what I was supposed to do. I had listened to a lot of advice from farmers, agronomists, and oenologists, certainly more technically qualified than me, but the responsibility was mine, and so were the decisions. I spent many hours in the vineyard, alone or with others, I walked so much through the vineyards with Don Alfio, who knew the history of the last fifty years and who had protected with all his physical and economic energy the part of his property, the heart of the vineyard, the strongest and oldest part.

One evening, watching the vines at sunset sitting on the ground at the highest part of the vineyard at about 850 metres above sea level, I decided to follow only two laws, those that filled Immanuel Kant’s soul with ever new and growing admiration and veneration, “the starry sky above me and the moral law within me”. It was necessarily a titanic work, it was necessary to remove all the dry plants, to break the superficial radical apparatus with deep hoeing, to raise all the vines, to equip them with new tutor poles, to rebalance the pruning that in part of the vineyard left the plants with too many shoulders in a logic of quantity more than quality. 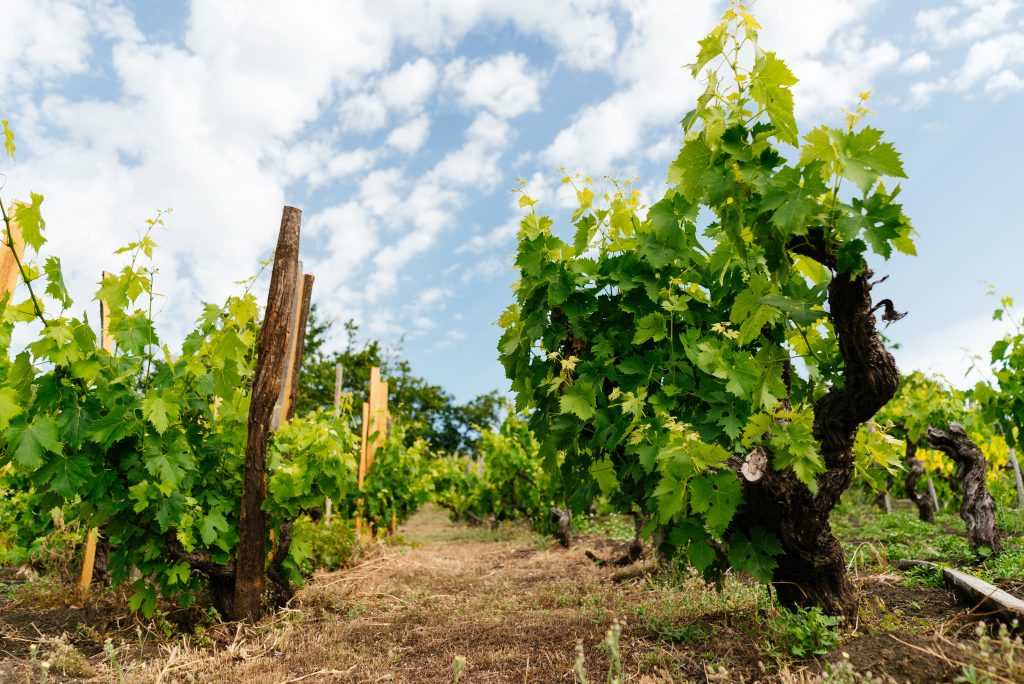 The most difficult part was the whole activity aimed at lifting the vines, it lasted about 5 years. You must lift them step by step, dig very well in front and behind the vine, without damaging the roots and then lift them gently a little at a time. The following year repeat the same operation and lift them a little more until the plant became parallel to the tutor post.
I discovered some vines under mountains of brambles, they continued to produce bunches even though they had been abandoned for decades. I decided to transfer them to explanting them in more appropriate areas of the vineyard. A very delicate but successful operation, not one of them died.

The Etnean bush-trained system imposes a tutor post per plant, strictly in chestnut wood from the stumps of the Etna woods. I chose posts of two meters, given the size of the plants and in the hope of repeating this investment as late as possible. We waited for the waning moon of January and February to rationalize pruning, remove excess shoulders, and re-establish the leaf surface/bunch ratio. Don Alfio has never pruned with a crescent moon to “not make the vines weep”, in fact, the lunar gravity would lead to a loss of sap from the vines, and in a vineyard with young volcanic soil, without clay and therefore water retention like Mount Ilice this would involve an excessive effort for the vines that would risk suffering especially in view of potentially dry seasons. 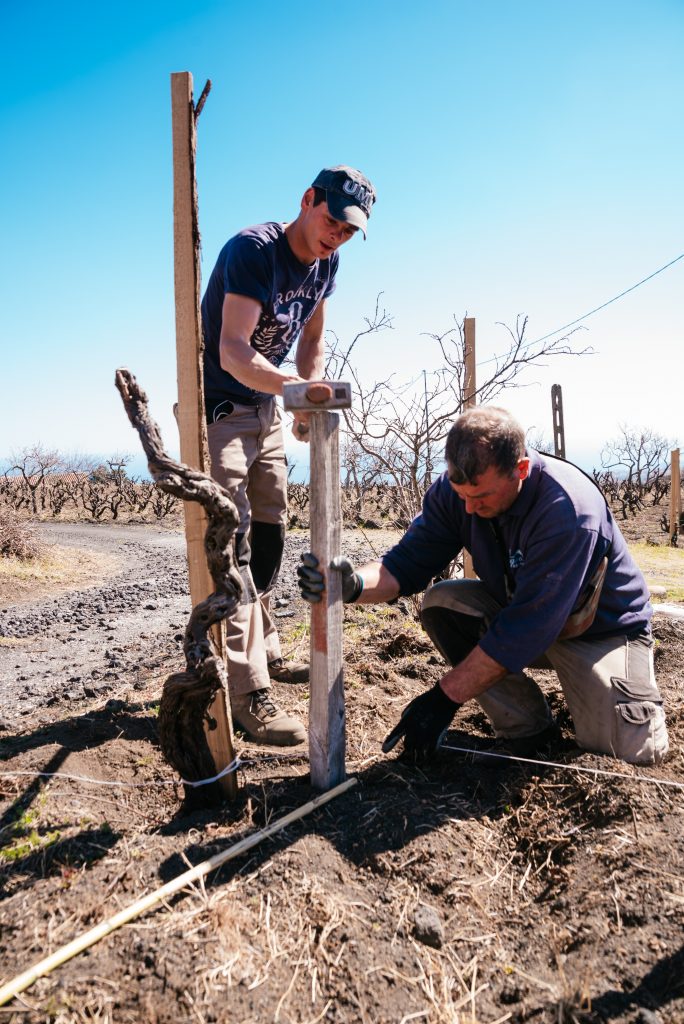 We carried out soil analysis in different parts of the vineyard, given its conformation it was natural to find great inhomogeneity and the objective was not to eliminate it, but only to know it. We carried out strictly organic fertilization to allow the vines that had endured the strain of lifting and more invasive pruning to resume their natural cycle. The soil on my side of Mount Ilice is strengthened by a nitrogen base due to the natural green manure of wild lupine, and a field beans that have been growing probably from centuries, we have to maintain and integrate them.

The ancients, in order to maintain the vineyards, substituted the dead vines, the failed plants, with wild ones that they would then graft taking the best genetic material from the vineyard itself, or in many parts of Etna, they challenged phylloxera by reproducing ungrafted plants with the method of the offshoot. I replaced almost all the failures, with small new vines of nerello mascalese and nerello cappuccio, reproducing them exclusively from the oldest pre-phylloxera vines in the vineyard. When working on the restoration of an ancient vineyard, we must forget the time horizon that our biology imposes on us and dilate the times in a multigenerational perspective. When these vines will be a hundred years old, perhaps the harvest will be done by my son’s children, or by someone else who will have the vineyard in his heart as I do. Others will spend entire weeks from August to October in a thousand worries, waiting for the dawn of the harvest. 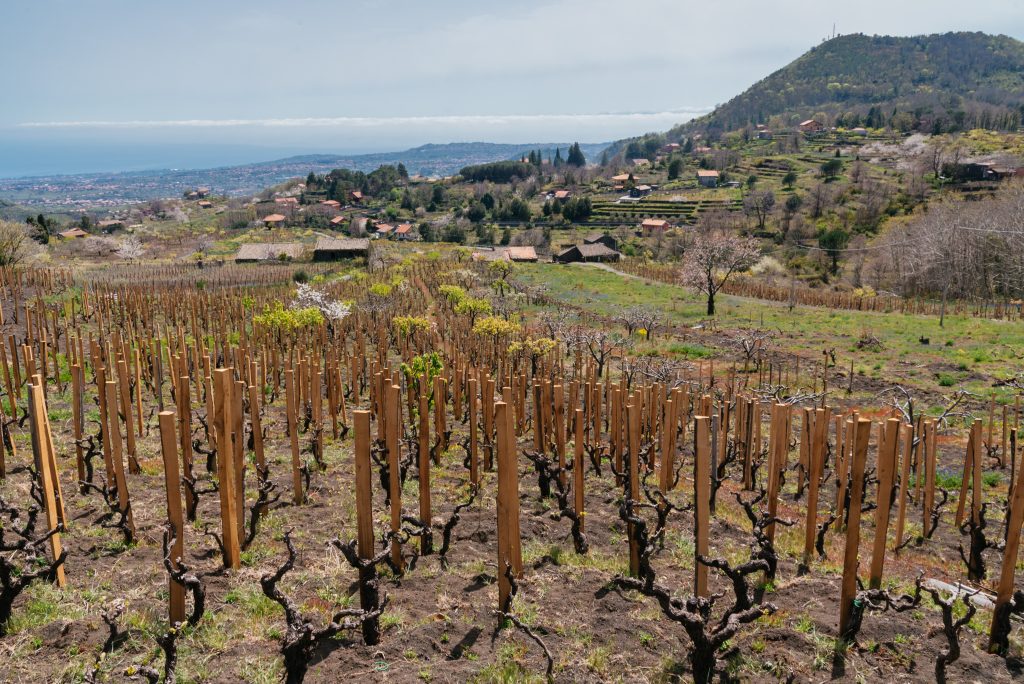 That’s why choices must be made that will bear fruit in the long run. After five years of sacrifice, I am sure I have helped the vineyard to regain the energy of the past, the vines have acquired a more beautiful colour, a different light, they are almost aware that for another generation cycle someone will take care of them. Deep down, I have dedicated every effort of this restoration to Don Alfio, I would like him to see how much joy there is now among his ancient vines in his sanctuary, even if in the end I think that he never really left the vineyard, but he continues to live there, on Mount Ilice.